Between 1914 and 1918, sixty-one Greek Orthodox churches were organized in the U.S. – one of them was Holy Trinity in Danielson. The community was founded in June 1916, when 25 families assembled to appoint the first Board of Trustees: George Berris, Peter Senopoulos, Gus Atsales and Chris Haveles.

These earliest Greek immigrants to northeastern Connecticut were from the Gortina area of the Peloponnese. The State of Connecticut granted “The Greek Orthodox Community of Danielson“ its incorporation papers on December 31, 1916. The first liturgy was celebrated in August 1916, at store front at 43 ½ Elm Street, East Brooklyn.

This property was owned by Quinebaug Mills where many Greek immigrants were employed. In the spring of 1917, the Danielson Greek community purchased the property on Water Street from The Taunton Mills Company, knocked down the mill tenements and began construction of the church. Theodore Andreas Haveles, the elder of the church, laid the cornerstone for the church on November 25, 1917.

Construction was completed in the spring, but due to a shortage of priest during the First World War, the church was not opened until June 1918. In 1923, the community purchased and renovated a small house on the corner of Water and Cottage Street that served as the site of the afternoon Greek School and community center until the church basement was upgraded to accommodate those uses in the late 1950’s. In 1961 the basement was totally remodeled to serve the growing community. In 1935, during the Depression, plans were announced that a Post Office was to be built on Water Street as a WPA project. On behalf of the church, Bill Mosteferis negotiated the purchase of two mill tenements existing on that site. The houses were moved across Cottage Street and sited adjacent to the church and provided income and a rectory for the church treasury for many years. Holy Trinity was the nearest parish to the Greek Orthodox Seminary in Pomfret, CT. During the years that the Pomfret Seminary was in operation, the families in Danielson hosted many seminarians and professors on Sundays and holidays.

Most notable guests were future Patriarch Athenagoras and future Archbishop Iakovos who were on the staff at Pomfret. In August 1941, representatives from twenty-five communities throughout New England met at Holy Trinity and established of HOYA - Hellenic Orthodox Youth Organization in an effort to bring together Greek Orthodox youth to preserve the religion, language and traditions. This organization was the predecessor to GOYA. A major renovation of the 1918 church was commenced in 1964. The iconography was executed by John Papaspiliopoulos from October 1964 to July 1965. He was a student of Photis Contoglou.

His work at Holy Trinity includes the Platytera, Anapeson, and Pantocrater, and all the icons of the icon screen. The refurbished church was consecrated on Sunday, November 28, 1965. The Consecration Service was performed by Archbishop Iakovos assisted by numerous priests who had ties to Danielson or the Pomfret Seminary or were from neighboring parishes. In 1994, the vigil lights were replaced with hand hammered lights from Yannina. Afterwards, three hand embossed chandeliers replaced the original chandeliers. In 2000, the Hellenic Center, which is adjacent to the church, was dedicated by Metropolitan Methodios of Boston. The new building creates a complex, with a social hall, priest’s office, a library, administrative office, the AHEPA hall, and three classrooms and a commercial kitchen. In 2004, the iconostastion was also replaced with an oak carved creation of wood carver Konstantinos Pilarinos of Astoria.

The community celebrated it’s one hundredth anniversary in November 2018. 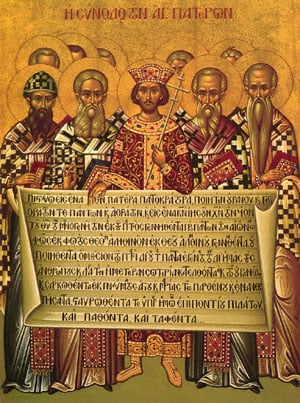 Fathers of the 1st Council

Fathers of the 1st Council; Hermias the Martyr at Comana; Eusebius and Haralambos the Monk-martyrs; Eustathios, Patriarch of Constantinople

Visit the Online Chapel for more daily readings, hymns, a monthly calendar of saints and feasts, and more.